The Historical Society recently received a medallion depicting a four-horse coach running past a building, with the letters “NL” visible on a hanging sign. The coach is not exactly a Concord Coach, nor does the building look quite like any in town, so what is this artifact? 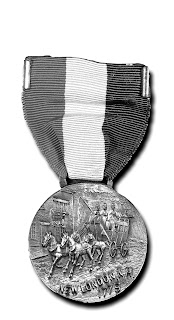 For an event logo, the stage coach was chosen as symbolic of the town’s development, and, in episode five, the pageant recreated a scene in which Colby Hill school students were excused from class to watch the first stage coach travel down Main Street in 1831. Future Governor Anthony Colby was credited with the securing the New London stop on the Lowell (MA) to Hanover (NH) route.

In 1929 the elected organizing committee of Emma Colby, Charles Shepard, and Stanley Spiller oversaw the work of 28 subcommittees. Taxpayers had appropriated $2,500 for the celebration, and of this amount, $575 was paid to the Whitehead & Hoag Co. of Newark, New Jersey, to furnish “badges” — cast medallions with ribbons and attached pins. The sale of badges, along with programs, postcards, and reserved-seat pageant tickets, raised over $4,000 to help meet expenses for the three-day observance.

So this coach-themed medallion played a fundraising role in one of the most ambitious historical celebrations the town has ever undertaken. You can learn more about New London’s sesquicentennial and read the pageant’s script in J. Duane Squires’ book, Mirror to America: A History of New London New Hampshire, 1900–1950.
Labels: Celebrations
Newer Posts Older Posts Home
Subscribe to: Posts (Atom)