The H.F. Walling map of Merrimack County (1858) contains an inset of Scythe Factory Village, located at the outlet of Pleasant Pond (now Pleasant Lake). Here the Phillips, Messer, & Colby Company began forging scythe blades in 1835. The business operated for over fifty years, and its product line expanded to include hay knives and axes.

Over the period, its small, wooden factories were enlarged or rebuilt, and water-power systems were upgraded. Iron, steel, coal, and grindstones, once delivered by teamsters from Concord, arrived at Potter Place storage facilities on the Northern Railroad. Mechanics Hall and later the Masonic Hall were built. The village merited its own post office. At its peak, the reincorporated New London Scythe Company employed about 75 workers, and the new schoolhouse enrolled forty children, though rarely did so many attend. 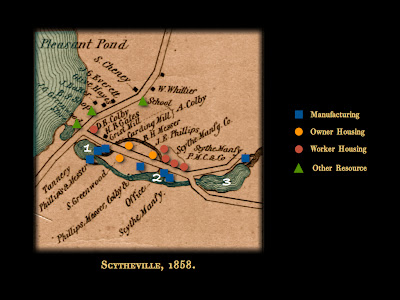 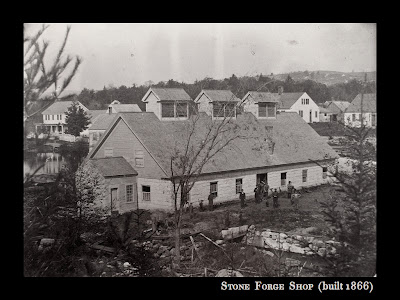 After a long series of building removals and demolitions, that former landscape has nearly faded from view. But by tracing the millponds, sluiceways and tailraces, you might still see the imprint of our 19th century industrial heyday in unexpected places. 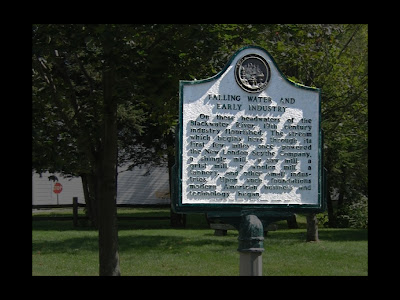 To learn more about Scytheville, find a copy of Reflections in a Millpond, published in 1984 for its sesquicentennial celebration, or stop by the Archives to browse the book and see more images, documents, and maps of the area.
Labels: Industry, Maps, Preservation
Newer Posts Older Posts Home
Subscribe to: Posts (Atom)